Another camera-free attempt at the WordPress Photo Challenge…. 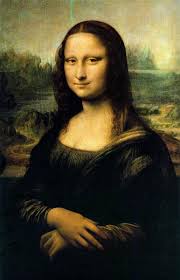 Leonardo da Vinci led Michelangelo into his studio and across to the easel in the corner. He held out one hand toward the painting resting upon it, and while he didn’t actually say “Ta-Dah!” Michelangelo could almost hear the words inside his head.

“What do you think?” asked Leonardo.

“Not bad?” said Leonardo in astonishment. “Not bad? This is my masterpiece.”

“That’s just rubbish,” said Leonardo. “I painted them all sitting on the same side of the table, what sort of a supper-party is that?”

“But people love it,” said Michelangelo. “They analyse it, they think one of the guys is actually a girl, they even think it’s some sort of code.”

“They’re mixing me up with Jamesbondo,” said Leonardo. “He goes in for that sort of stuff. Anyway, what’s wrong with this painting?”

“Well, in the first place it’s a bit gloomy. Where is the background supposed to be?”

“What, sunny Tuscany? I can’t see the Tuscan Tourist Board being too impressed, you’ve made it look like Mordor on a winter’s day. And she’s a bit gloomy too.”

“What do you mean?” asked Leonardo.

“Well, why is she glaring at you like that?”

“That’s not a glare. That’s an enigmatic smile.”

“Is ‘enigmatic smile’ a euphemism for glaring?” asked Michelangelo. “Because she looks as if you’ve just told her that yes, her bum does look big in that dress. Plus she looks like a Goth girl.”

“She does,” said Michelangelo. “Give her black fingernails and black mascara and she could go to a Metallica concert.”

“Yes, he’s got a whole band now,” said Michelangelo. “A string quartet, apparently. And speaking of mascara, why has she no eyebrows?”

Leonardo stared at the painting. “Shit,” he said. “I’ll paint some on later.”

Michelangelo knew that he wouldn’t. He had known Leonardo for a long time, ever since the two of them (along with Raphael and Donatello) had been at school together. He knew that within seconds of the conversation ending Leonardo would be drawing futuristic sketches of helicopters, TV remote controls and the transporter room of the starship Enterprise, with the eyebrows already forgotten.

“Any other constructive criticism from someone who’s basically an interior decorator?” Leonardo said nastily.

“Yes,” said Michelangelo. “Where are her boobs?”

“Yes, I know that,” said Michelangelo, “but you can’t see them, can you? Boobs are very popular at the moment -”

“Well, yes,” said Michelangelo, “but I mean in art. Look at Botticelli and his Birth of Venus. Logically Venus should be a tiny baby at her birth, but he made her a grown woman, stuck a big pair of knockers on her front, and was able to sell the painting for ten thousand lira.”

Michelangelo looked harder at the picture. “Ah, now I get it,” he said excitedly, “and you’re right, it is your masterpiece.”

“Because you, the artist, obviously represent simply ‘man’, and like simple man have just come home from the pub four hours after you said you would. She’s ‘enigmatic smiling’ at you in that way that all we men recognise in such occasions, and, of course, we have your final touch of genius.”

Saturday’s prompt at our Writers’ Group was “speaking of idle talk”….

“He did that statue, you know, the nudie one.”

“David. I’ve seen it in the Vatican.”

“I meant the statue.”

“He painted the ceiling of the Sistine Chapel.”

“Like, is it blue? Or white? Or one of those colour-chart made up colours – autumn mist, snowflake white, catsick green.”

“It is if your cat’s just drunk your bottle of Chartreuse. Trust me on this.”

“Anyway, he didn’t paint it a colour – he wasn’t a painter and decorator. You’ll be asking me next did he wallpaper the Papal balcony.”

“No, I won’t. Why would you wallpaper an outdoor balcony?”

“Look, he didn’t do any of that. He painted pictures on the ceiling.”

“Wow, he must have got an awful crick in his neck.”

“Yes, I suppose he must. Unless he did it lying on something, painting upwards.”

“Then he’d have got paint in his eyes.”

“Anyway, what pictures did he paint?”

“He painted one of the birth of Adam – “

“No, Adam was born fully grown.”

“No, he wasn’t born like that. God just created him. The picture has him and God stretching out their fingers towards one another -”

“No. Well, yes, sort of. Anyway, it’s God bring Adam to life, by them touching fingers.”

“How come Adam’s able to stretch out his finger to God, if God hasn’t touched Adam’s finger yet?”

“It’s a mystery. One of the mysteries of the rosary.”

“What are the other ones?”

“Um, why is Good Friday called good if it’s the day Jesus died, how are you supposed to only eat fish on a Friday if you live somewhere landlocked like the Czech Republic, why would angels want to dance on the head of a pin, why does a communion dress cost four hundred euro, where can you actually buy rosary beads, and what had St Patrick got that St Brendan & St Bridget hadn’t that made him Ireland’s Patron Saint, especially since he was Welsh.”

“That’s a lot of mysteries.”

“And they’re just the sorrowful ones. There’s also the joyful ones, and the, er, mysterious ones.”

“Like how did he know what David looked like in the nude if David had lived centuries earlier?”

I tore up the notes I’d made, for the speech I’d been running over and over in my head, for the exact way I was going to propose later that evening.

It’s very hard to concentrate in a room where women come and go, talking of Michaelangelo.

I was on a work-related course on Friday, and while the lecturer was going from desk to desk, checking our exercises as if we were still at school, I overheard her tell one of the others that “Michelangelo was left-handed, but of course he fiddled his taxes”….

Michelangelo was seated at a table, and the two sat down opposite him.

“Ah, Michelangelo,” said the Pope. “I’ve called you here to discuss a rather delicate matter. As you know Vatican City is a small statelet with a tiny population, so small that indeed we can barely field a soccer team. In fact, we had to play two of the nuns in our last World Cup game, and so could only manage a one-all draw with Scotland.”

“So I heard,” said Michelangelo.

“With so few people we need to ensure that everyone pays their fair share of taxes, which is why we’d like to discuss your return for the year MDXI.”

“You are now a huge success. Indeed much of your work is for us, here in the Vatican, so we are well aware that you were paid 20 thousand quid (no, really, it’s a Latin word, this is where it comes from) for painting the Sistine Chapel that year. Yet your return gives your taxable income as 5 quid and 27 centum.”

“Yes, well, I am not an expert in tax fraud,” said the Pope (Michelangelo noticed the small man’s eyes raise ever so slightly towards Heaven), “so I have brought along my assistant, Revenus, who will go through some of the items on your return with you.”

Revenus opened a folder in front of him. “The first item you have claimed,” he said, “is three thousand quid for paint. I believe that a large tin of emulsion costs three quid, so you appear to be claiming for 1,000 tins, which I calculate would paint every house from here to Worms.”

“It’s some sort of health resort in Germany,” said the Pope. “Apparently they have a special diet.”

“I see,” said Michelangelo. “Well, for your information it’s three quid for a tin of white emulsion. Flesh-colour needs special pigment, and costs 50 quid a tin. Plus, I have to sign ‘Michelangelo’ on all of my paintings. It would be a lot cheaper if my name was Raphael.”

(And the story would be a lot easier to write, thought a historian who would later chronicle this event).

“You have in two hundred quid for, um, adult magazines,” said Revenus.

“Research,” said Michelangelo. “I have to know exactly what the naked human form looks like, in many different positions.”

“Do you still have these magazines?” asked the Pope. The other two looked at him. “I’d like to form my own opinion about their relevance,” he said, blushing slightly.

“Moving on,” said Revenus, after a short silence, “you have claimed five hundred quid for brushes.”

“You’ve put in a hundred quid for a chisel,” said Revenus, “but in fact you did no sculpting that year.” 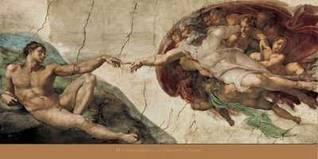 “No, I didn’t,” agreed Michelangelo. “The chisel was to put the cracks in the painting of The Creation of Adam.”

“I thought they were caused by age,” said the Pope.

“How could they be?” said Michelangelo. “The painting’s only just been finished.”

Revenus sighed, but had one card left to play. “Finally, you have a figure in for five thousand quid that just says ‘God’.”

“That’s what He charged for modelling for the painting,” said Michelangelo. “He had to stay in the same position for seven months.”

“You’re seriously claiming,” said Revenus, “that you got God to model for you?”

“Of course,” said Michelangelo. “I could hardly paint him from memory.”

Revenus stared hard at Michelangelo. It was the stare which had broken the spirit of many a tax defaulter, making them admit to second bank accounts, to not declaring company chariots as benefit-in-kind, to running shell companies (it’s where Botticelli hid his royalties from The Birth Of Venus).

To his surprise, Michelangelo stared calmly back. The two locked gazes, like antelopes locking antlers, for over two hours. Eventually Michelangelo spoke.

“I watch paint dry for a living,” he said. “You’re out of your league this time.”