Tara. A field beside the hill.

Enter KING MACDARA [he draws upon the hill-face]. Enter BETH.

BETH: Father, what art thou at?

MACDARA: Behold the fiery trail above.
This evening while I watched the sky
Between the stars a reindeer passed,
With snout of flame, that lit the way
For fellow deer behind his hind.
They pulled a sleigh of childhood gifts
Like dolls, and books, and shiny pence
And sweets the shape of walking-sticks.
The reindeer reins were reigned by one
With cloak of red and beard of snow –

BETH: Father, I fear that madness –

MACDARA: Now, dear, one does not interrupt the soliloquy.

BETH: Of course not. Forgive me.

BETH (alarumed): Dies? What do you mean, dies?

GHOST of MACDARA: Well, it’s not one of his comedies. 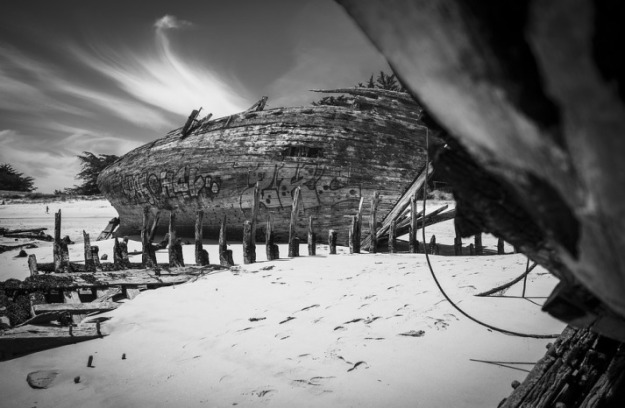 Fire&Ice week 8 – use the photo, less than 200 words and include an inventor or a conspiracy theorist…

It lies as if tired on the shore of a remote mountain lake. Conspiracy theorists believe that aliens arrived in it. This is clearly nonsense, not least because it is made of wood.

The truth, of course, is that aliens tried to go home in it.

Their own craft is at the bottom of the lake, since from space there was little to tell them that the green bit below was solid ground while the blue bit wasn’t.

They dragged themselves ashore, climbed a nearby cliff and set about making an engine from items they found in a deserted cabin – a tin mug, two candles, the pages from a Harry Potter book and a flat car battery. The cabin itself became the fuselage and a set of skids.

They set themselves speeding down the hill toward the cliff edge. They soared into space.

They have been working since on a Mark II, this time involving a metal hut, a disused lavatory, a gas-stove lighter and a well-shaken can of beer. Today was launch day, as you can tell by the explosion in the distance.

They are going to be here for a while.

Eternalflame.com is not a Bangles fan site.

The company has provided memorials since time immemorial, all the while hiding a huge secret, like the ingredient in a granny’s sauce.

There is no such thing as an eternal flame.

If there was then dragons would not sleep. Or produce more dragons, indeed, since being inflamed with passion is not as much fun as it sounds.

So beneath each memorial a small team, in both meanings of that phrase, is endlessly stoking the fire.

If you watch one long enough you may get to see the shift change, where the night crew back out of the narrow tunnel and their day colleagues crawl in. If they get the timing wrong the flame goes out briefly, like a sneezing firework.

Olympic Games are more difficult, as the staff have to go in and out of the column beneath the cauldron. The shift change here takes place when no-one is watching, usually during the fencing.

So the company is a charade, but so what. It is where governments shop when pretending to honour the dead of wars that those same governments got them into.

This photo was the prompt for the Fire&Ice week 6 contest – 93 words exactly, and include an animal or a plant…

She was the only one getting off here. Not many people get off at the cemetery.

Unless it’s a ghost train, Dad would have said.

If he was here.

She walked, arms tightly folded, through the gate and past years of names until she reached a plot, its earth newly broken, like her heart.

She took a potted plant from her back-pack. A geranium. She knelt and pressed the pot gently into the earth.

You’ve brought me a present, Dad would have said, in mock surprise. Am I ill?

If he was here.

A Yoruba bride and mother. Photo by Fhadekhemmy

He had said he was a European prince.

He had played upon her kindness and her loneliness. He had slowly won her trust. He had told her she was beautiful and had spoken of marriage, if only he could move his funds somewhere safe and flee his country.

He had not come, but her money had gone.

So she had wept on her daughter’s shoulder. A curse be upon him, she had mumbled, through gulping, snot-burbling sobs.

Who was blessed with a degree in computers, a fierce protectiveness of her sweet-natured mother and a healthy ambivalence towards the ethics of hacking.

Her mother has her money restored now, though her heart and pride will take a while yet.

While a man in Sofia has an empty bank account, a smartwatch that is stuck on American Mountain Time, and a Netflix account that plays only old episodes of Lost. Dubbed in Japanese.

The boys were bored, as bored as you can be on a late summer afternoon beside a lake so stagnant that it was growing stubble.

So when young Moses claimed that he could part the waters of the lake they sat patiently while he gave it a go.

Only Aaron looked concerned. He worried about his younger brother, who was bullied in the village because he was different.

“Why the stick?” asked Ezekiel.

“I’m not sure,” admitted Moses. “I just have a feeling it makes magic easier.”

After an hour of Moses shouting and pointing, like a shepherd at a shambling sheepdog, Joshua looked over his shoulder.

“You’re right,” sighed Moses. He held the stick between his palms and tossed it out onto the lake, his hands parting as if releasing a dove.

The surface split, silently, either side of a path littered with stones, gasping frogs and, because all bodies of water contain one, a supermarket trolley.

Moses gently brought his palms together, and the waters closed.

Aaron smiled. “That’s going to come in really handy,” he said, “if you’re ever chased by bullies.”

Being eternal, the Four Horsemen of the Apocalypse thought they would last forever.

And being eternal, they will, but it will be a pale shadow of their former existence, hidden away in those darkest corners of nightmare, where nightmares themselves go to hide.

In a world of Fortnite, donuts and Final Destination movies the Four no longer scrape the blackboard of the soul of humanity. Like Seventies disco they find themselves forgotten and unmissed. They are the hula-hoops of the heavens, the CDs of the celestials, the Space Invaders of space.

They are toast. Without avo.

Becoming nobody happens very quickly. The Four rode out this morning, as always, but found themselves strangely listless. When they first heard the rumbling they thought it was their own hoof beats, echoing back from the Kissing Camels Motel on the hillside behind them, but the sound grew, as did their sense of dread. They sped up, fuelled as always by fear, but now the fear was theirs. They heard the hooves gain, they huddled together as they rode. Suddenly four riders galloped past, contemptuously brushing them aside with bolts of fire. They tried to fight back, but Conquest could summon only a brief flame, like a burping firework, while Death managed just a sepulchral sneeze of dust.

They were passed, and passé.

They pulled their horses to a halt and gloomily stared at the disappearing rumps of their usurpers. Humankind then swept past, ignoring them, slavishly chasing newer first-world scourges.

The new Horsemen are Golf, Hummus, Nipple-piercing and Twitter.

This was the photo prompt for the Fire&Ice week 2 contest – the story had to be exactly 75 words, and include a revolutionary or a droid…

They are too literal. Dress them like us, line their faces with mock experience, give them names like ours (his is Robert – yes, Robert Robot, his owner is too literal, too), but they do not understand that words have as many lives as they don’t.

The students asked could he get them a bag of coke.

Back in 2013 and 2014 I used to enter a micro-fiction contest run by Flash!Friday every, well, Friday. The site closed in 2015 but Rebekah and Deborah re-launched it earlier this year running a 24-hour contest called Fire&Ice each Friday for just 19 weeks. Each week we got a photo, a word count and two options, one of which had to appear in our very short story. This is the final week, and I’ve decided to post my stories here, two each day…

Jeff doesn’t shovel the snow off his pathway. Or off anywhere else. In a hut in the Antarctic there seems little point. He keeps his small square bathroom window permanently open, though. If you lived on dried fish so would you. He has a skylight in his bedroom, up a small flight of ice stairs.

His front door is kept clear too, so that his pet penguin Petunia can slide gleefully down the path to her morning swim.

Oh, and for deliveries.

Jeff is a loner. He is not an idiot. He buys clothing and toiletries. He buys books and box-sets. The room on the bottom left is his wine cellar.

One of his Amazon purchases was a small drone. He launches this now, guiding it silently out over the peace-piercing, diesel-coughing dinghy. Beneath the drone’s Release and Drop device sways a large bag of guano and fish-guts.

This is another story based on the above Flash! Friday photo, which had to be set on the Moon…

It’s not easy being married to someone who works nights.

Mrs Moon had known that, but had given up her life as a Siren to marry the Man in the Moon anyway. To her it was simple – she was in love. How could she not be – he was a wonderful soul devoted to making life more beautiful for the people below. She loved to watch as his artist’s hands skilfully moved the moon’s light along a range of shades, everything from scythe-narrow crescent to full, werewolf-waking brightness.

And she watched as he made the moon wax and wane, though she had no idea what either of those words meant.

So she came up with a plan. He argued against it, but she was a Siren, and could pretty well make men do what she wanted. Besides, he loved her, so would have ended up doing it anyway.

So tonight he used those brilliant hands to move, nudge, inch the moon sideways, forwards, until it was directly in eclipse behind the sun.

They’ve gone to Finland, with its six months of daylight.

Copyright © Tinman, 2008-2019. Unauthorized use and/or duplication of this material without express and written permission from this blog’s author and/or owner is strictly prohibited. Excerpts and links may be used, provided that full and clear credit is given to Tinman with appropriate and specific direction to the original content.
Worth Doing Badly
Create a free website or blog at WordPress.com.
Loading Comments...