The last girl had left the stage in tears, having been told that her voice sounded like whale-fart played through a conch-shell. The judges were getting frustrated. They had been auditioning for three days now and were no nearer to finding what they were looking for.

The next girl looked different to the others. Sure, she had the bedraggled curls of a girl who had spent her entire life in the water, and the wrinkled finger-tips to back that up, but her hair was less bleached-looking, as if she had lived in fresh water rather than the sea.

She was almost as naked as the other girls, but wore one really wide white sleeve.

“Why are you wearing one sleeve?” asked Shyryll.

“All I could afford,” said the girl. “Do you have any idea how much white samite costs?”

“Why did you need it?” asked Luway.

“I had to wear it for my last job,” said the girl. “The job description said ‘an arm, clothèd in white samite, held aloft Excalibur’, so I could hardly do it in a red knittèd shawl.”

“Excalibur?” asked Tulisa, whose name was strange enough not to have to mess with it.

“Some sword,” said the girl, shrugging. “A guy took it so he could be King. The once and future King, they called him, which tells me that somewhere along the way there’ll be a gap in his Kingship. Possibly literally, swords can make a pretty big hole.”

Poseidon got the feeling that this girl hadn’t spoken to anyone for a long time, and was making up for it now.

“Anyway,” she continued, “the job at the lake was obviously about as temporary as it gets, so when I heard about this audition I decided to give it a go.”

“Might as well start so,” said Tulisa. All of the judges put on their best “I‘m not going to be impressed” faces.

The girl cleared her throat, coughing a small patch of pondweed onto the studio floor in the process, and then loudly shouted “nee-nar, nee-nar, nee-nar”.

There was a short stunned silence. Eventually Poseidon spoke.

“Of course I do,” said the girl. “I can do a really good ice-cream van as well.”

“That’s not what we’re looking for,” said Luway. “Our Sirens are singers who lure sailors onto rocks with the beauty of their songs.”

“Why?” asked the girl. “What have they ever done to you?”

“Plus they throw their pee over the side of their ships,” said Tulisa.

“I know a song that can lure sailors onto an iceberg,” said the girl. “Would that do?”

“This isn’t going to be My Heart Will Go On, is it?” asked Poseidon.

The girl began to nod, then saw the look on his face. “Er, no,” she said. She thought for a few seconds. “How about this then?”

She began to sing, a melody without words, and the judges mouths fell open, which is unfortunate when you’re underwater. Her voice had an aching, haunting beauty, the kind that took your soul, kissed it, then crushed it like a rose-petal.

When she finished the final notes seemed to hover in the air, almost visibly. The four judges stood and applauded.

“Oh my God,” said Poseidon, forgetting for the moment that he was in fact his own god. “If we get you some backing singers you could be a huge hit. What’s your name?”

“Too long,” said Tulisa. “We’re going to call you Lorelei.”

“And keep the white sleeve,” said Shyryll. “We can use it as your gimmick.” 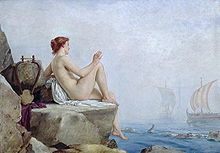 And there she is (via Wikipedia)