I’ve slagged them off all year, but today, just for today, I’d like to be nice to WordPress.

I’ve poked fun at “what would you like 200 more of”, “is it better to have the first word or the last” and “which is more important, electricity or the internet”. I’ve fought off the urge to answer their question about strength, chose not to answer the one about free will and cleverly avoided the one about stupidity.

I even posted a fake list of the type of suggestions they’d be reduced to by the end of the year, and realise now that it wasn’t half daft enough.

And yet.. last year I wrote 197 posts, sometimes going five or six days at a time without writing anything. This post will be my 350th of this year. Even if it’s only to avoid the embarrassment of having a calendar with a load of blank days beneath a sign saying “I’m Part of Postaday 2011” I have done more writing. And I have to thank them for that.

I have to thank them for all of the new, genuine friends that I’ve made over the year (that’s you lot, in case I’m being too subtle).

And I have to thank them for their Weekly Photo Challenge, which I started taking part in as a joke and then found that I was really enjoying it, and was actually starting to think like a photographer.

We have two lovely photos of New York up in our office, and one day I took this picture: 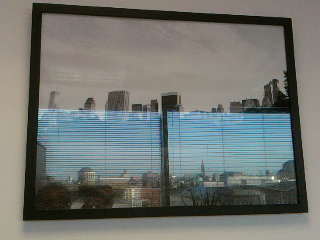 It’s the Dublin skyline reflected in a photo of the New York one. I don’t know if it’s good or not, but I love it and I love the fact that I noticed the possibility in the first place.

So Happy New Year to Scott Berkun and all at WordPress.

11 thoughts on “In Praise Of WordPress”