You might have noticed that aliens tend to appear only to sad middle-aged men in remote backward places, so it should come as no surprise that last night a small spaceship dropped to hover in front of me as I walked home through our remote backward town (it’s ok, no-one from Greystones reads this). 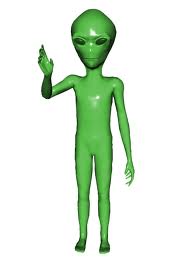 The door hissed open and an alien walked out. He was green, had long fingers, spindly legs and huge saucer-shaped eyes. If you think this sounds suspiciously stereotypical, then please consider that he must have looked at my small eyes, nostrils on my nose, hair on my head and open-mouth of astonishment and thought exactly the same thing about me.

“Take me to your leader,” he said.

They always say this. It appears that every other planet they have ever visited has just one ruler, and that any hick on his way home from the pub will have instant access to this leader, without having first to go through his secretary, his bodyguards and a really long-winded answering machine (“if you wish to introduce the Supreme Emperor to a visiting alien, please press 5”).

“Which leader? We’ve lots of them here at the moment. We’ve a guy who’s nominally still in charge of our country, even though he’s not even leader of his party anymore. He says this is constitutionally plausible, so he might be the leader. There’s the guy who’s taken over as leader of that party, which is still the biggest in the government, so he might count as leader. There’s a guy who will be the head of a new government in about  in about three weeks, if you‘d like to hang about a bit. Over all of this we have a President. She‘s just a figurehead, has no power, but she is our top citizen.”

It’s funny, though his features and facial expressions were completely different to ours, just by looking at him I could tell he was starting to develop a headache.

“Oh, I haven’t finished yet. There’s the President of the EU, the Governor of the IMF and the Chairman of the European Central Bank, who have all just taken us over. There’s the clergy, who like to think we’re following their preachings, though we aren’t. There’s the head of NAMA, who’s managing all our debt. There’s the bankers, millionaires and developers who really run this country (wow, Tinman, political satire, we’re impressed). There’s Mary Byrne from the X-Factor, who rules our hearts.”

“Anyone else? Is there no one person who’s every word you feel you must obey?”

I thought of Mrs Tin, remembered that friends of hers sometimes read this blog, and chickened out.

The alien sighed. “Guess I might as well leave so,” he said, and turned back towards the door of the spaceship. He looked so crestfallen that I tried one last time, and came up with one last name.

“Wait,” I said, “there’s Bono. He’s not actually a leader, but he tells the world leaders what to do.”

The alien turned back to me and smiled.

Obvious once you know, isn't it?

4 thoughts on “Too Many Chiefs”